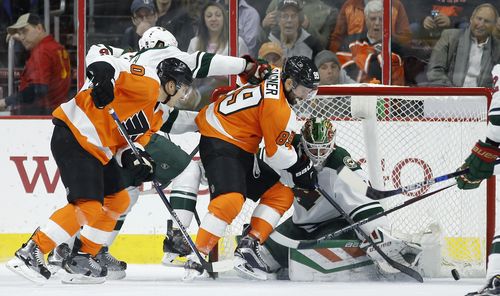 PHILADELPHIA (AP) — Pierre-Edouard Bellemare scored the go-ahead goal early in the third period and Michal Neuvirth made two stellar saves late, helping the Philadelphia Flyers open a six-game homestand with a 3-2 victory over the Minnesota Wild on Thursday night.

Mark Streit and Sam Gagner also had goals for Philadelphia, which won for just the fourth time in 11 games. The Flyers opened play five points out of a playoff spot, but they needed to leap over five teams.

Coach Dave Hakstol went with backup goalie Neuvirth for the second straight contest. Neuvirth made 24 saves to improve to 14-7-4.

Thomas Vanek had a goal and an assist and Mikael Granlund also scored for the Wild, who dropped their second straight while falling to 4-2 under interim coach John Torchetti. Minnesota began Thursday four points behind Colorado for the final playoff spot in the Western Conference.

Bellemare scored with 16:39 remaining after Chris VandeVelde won a battle for the puck behind the net. His wraparound try failed, but Bellemare dived for the rebound and poked the puck high over Devan Dubnyk. It was Bellemare’s fourth…