You Are Here: Home → Brad Marchand&apos;s repeat licking is making a mockery of the NHL playoffs Brad Marchand&apos;s repeat licking is making a mockery of the NHL playoffs 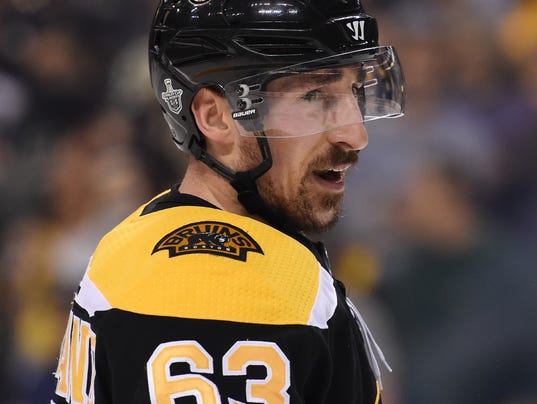 Boston Bruins forward Brad Marchand owns a Stanley Cup championship ring and three consecutive with at least 34 goals. Twenty months ago the big story at the World Cup was Marchand playing like the perfect winger for Sidney Crosby.

Today, he looks like a goofball who gets his kicks from getting his licks in, and not the way the Broad Street Bullies used to do it.

When Marchand came nose-to-nose with Tampa Bay Lightning forward Ryan Callahan Friday in Game 4 of the Eastern Conference semifinal, Marchand leaned in and licked him on the face.

What makes this story stranger still is that Marchand is a repeat licker. He licked Toronto Maple Leafs forward Leo Komarov in the first round of the playoffs.

Is this what Marchand wants for his NHL legacy? Nothing lasts forever except YouTube videos.

The first time we can maybe pass off the licking as a bad joke gone awry. The second time necessitates immediate action.

No statute in the NHL rules specifically addresses a penalty, or punishment, for licking an opponent, because who in the heck would ever…