You Are Here: Home → Braves 4, Mets 3: Mets Get Rare Good News on Injuries, Then Fall to Braves Braves 4, Mets 3: Mets Get Rare Good News on Injuries, Then Fall to Braves 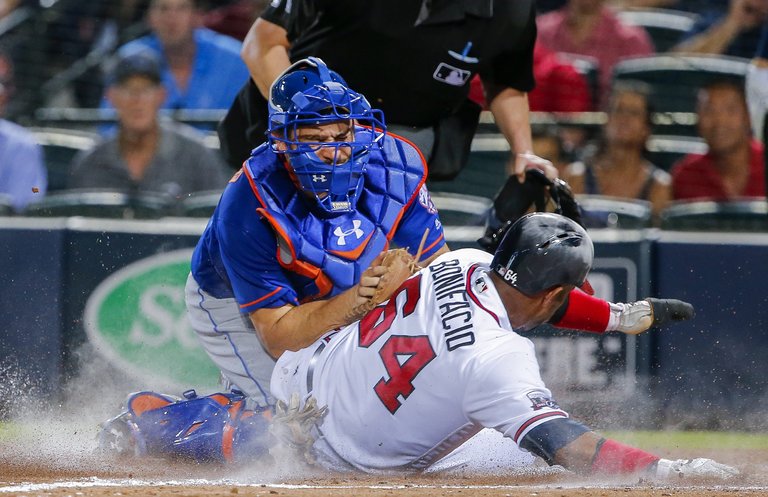 Mets catcher Travis d’Arnaud tagging out the Braves’ Emilio Bonifacio in the seventh inning. Despite the play, which saved a run, the Mets gave up a one-run lead.

ATLANTA — As the Mets were rejoined Thursday by two of their most important players, Noah Syndergaard and Yoenis Cespedes, the injury-riddled team moved closer to its version of normal. The alarms that went off when Syndergaard and Cespedes left Wednesday afternoon’s game against the Kansas City Royals with injuries were calmed later that night.

“The level of relief comes from now you do know that they’ve just been checked out and there’s nothing seriously going on,” said John Ricco, the Mets’ assistant general manager. “But it’s part of the day to day of the long season.”

Still not whole yet, the Mets dropped their fourth straight game to the Atlanta Braves with Thursday’s 4-3 loss. Matt Harvey battled with his command and allowed two runs on eight hits, but managed to record his fifth straight start of at least six innings. But reliever…