You Are Here: Home → Bucks 104, Knicks 93: Knicks Lose a Third-Quarter Lead and Fall to the Bucks Bucks 104, Knicks 93: Knicks Lose a Third-Quarter Lead and Fall to the Bucks 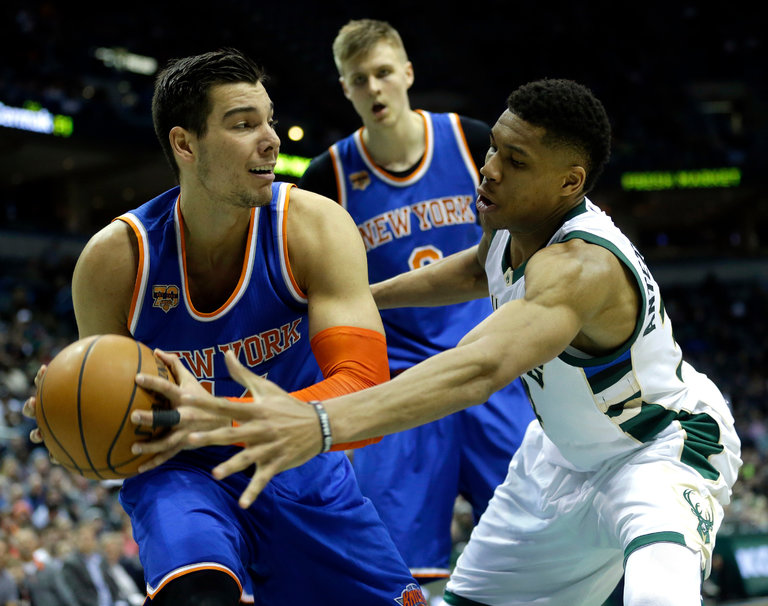 Willy Hernangomez, left, pulled down a rebound against Giannis Antetokounmpo and the Bucks during the Knicks’ loss on Wednesday.

MILWAUKEE — Giannis Antetokounmpo has become a player the Milwaukee Bucks can count on to flip the momentum of a game. He did so yet again Wednesday night.

With his team facing a double-digit deficit in the third quarter, Antetokounmpo took over. He scored 22 of his 32 points in the second half, helping Milwaukee rally for a 104-93 win over the Knicks.

The Bucks extended their winning streak to four games, moving to half a game behind Chicago and Detroit for the seventh and eighth playoff spots in the Eastern Conference.

“It is just the competitive nature out of me,” Antetokounmpo said. “When they go on a run and are up 10 or up 12, I get really competitive. I feel I have to go right now. I don’t even think about it. It just comes naturally.”

Derrick Rose led the Knicks with 26 points, 20 of them in the second half. He was 13 for 16 from the field. Carmelo Anthony scored 16 points in his return…