You Are Here: Home → Chargers missteps can't get Philip Rivers down 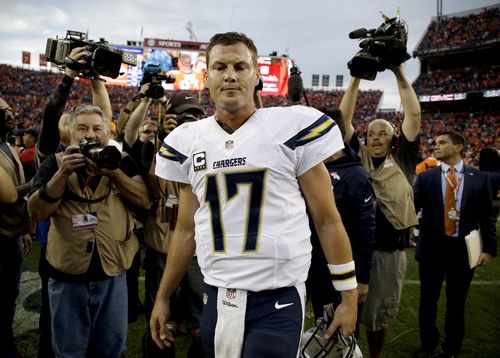 DENVER (AP) — After another head-scratcher of a loss — most of them have been like that for San Diego this season — Philip Rivers did what he often does. He looked at the bright side.

If only that were true.

In 2007, Rivers was a fourth-year quarterback, the Chargers roster was drenched in talent and a Super Bowl trip or two seemed like a foregone conclusion — if not that year, then soon.

Nearly 10 years later, the Super Bowl is still on hold. And though Rivers has surpassed Dan Fouts as San Diego’s most prolific passer, his place in NFL lore remains in limbo, held hostage to a franchise that has let things slowly decline around its star quarterback since the days when the Chargers ruled the AFC West.

With every passing year, the odds of Rivers doing what Fouts couldn’t — namely, take the Chargers to the Super Bowl, grow longer.