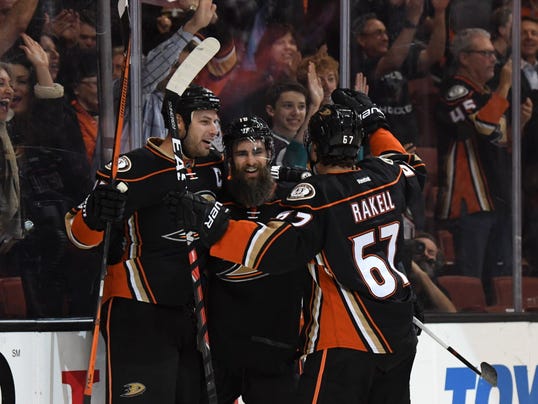 ANAHEIM, Calif. (AP) — If the Anaheim Ducks and Edmonton Oilers were looking to send a message to one another ahead of a possible matchup in the playoffs, it didn’t take.

Instead, the Ducks were left relieved that a first period no-show didn’t end up costing them the win — and the Oilers hoping the two points lost taught them a valuable lesson.

Rickard Rakell scored the go-ahead goal, Hampus Lindholm had a goal and two assists, and the Ducks defeated the Oilers 4-3 on Wednesday night.

“We weren’t very happy with our first period, but the team responded like we wanted to,” said Ducks captain Ryan Getzlaf, who had three assists. “We kept pushing.”

Jonathan Bernier made 29 saves, and Josh Manson and Patrick Eaves also scored as Anaheim passed Edmonton for second place in the Pacific Division with nine games remaining for both teams.

The Ducks took the lead…