You Are Here: Home → Earliest NBA would consider changing one-and-done rule is 2020 draft

SportsPulse: The Warriors made relatively quick work of the Spurs in the opening round but will now face a hungry Pelicans team in the Western Conference’s second round.
USA TODAY Sports 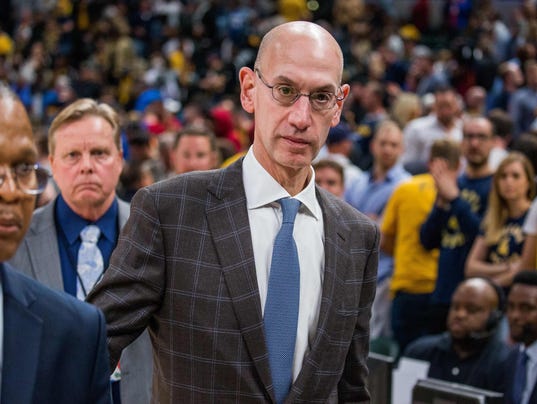 NBA Commissioner Adam Silver walks off the court after game four between the Indiana Pacers and the Cleveland Cavaliers in the first round of the 2018 NBA Playoffs at Bankers Life Fieldhouse.(Photo: Trevor Ruszkowski-USA TODAY Sports)

The 2020 NBA draft is the earliest the NBA would change its draft eligibility rule and return to the high school-to-NBA rule the league used from 1995-2005, a person with knowledge of the situation told USA TODAY Sports.in

The person requested anonymity because he was not authorized to speak publicly about the ongoing discussions between the league, its teams and the National Basketball Players Association.

There is no guarantee a new rule goes into effect in 2020, only that it won’t happen in 2019, the person said, adding further discussion needs to take place.

The issue needs to be collectively bargained and agreed on between the league and players’ union (NBPA). The league and union do not have to wait until the current CBA expires to negotiate a…