You Are Here: Home → How a Team in Seattle, of All Places, Changed Hockey Forever How a Team in Seattle, of All Places, Changed Hockey Forever

“It was Seattle’s domination during these years that forced professional hockey to legalize the forward pass in the 1918 season,” Bowlsby said. “Prior to that, everyone except the P.C.H.A. made lateral passes, like rugby.”

Despite the Metropolitans’ nine years of existence, there is not so much as a plaque to commemorate the team and its influence. The N.H.L. also has not acknowledged Seattle’s history in its centennial celebrations, which began Jan. 1.

John Dellapina, the N.H.L.’s vice president for communications, said the league was “focused solely upon players’ accomplishments in N.H.L. games or N.H.L.-organized events and moments that occurred since the founding of the league in November of 1917 and the playing of its first games in December of 1917.” 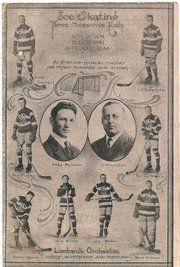 A scorecard commemorating the team’s 1916-17 season.

The anniversary of the first American Stanley Cup would have probably passed unnoticed if not for the efforts of Paul Kim, a…