You Are Here: Home → Ken Hitchcock, 3rd in NHL wins, retiring after 22 years 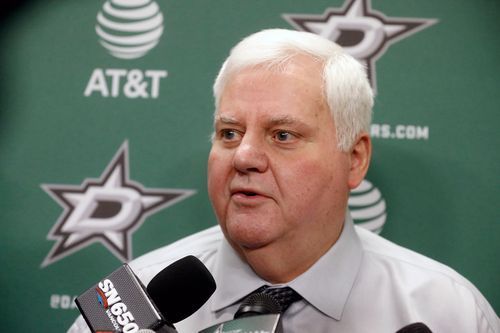 FILE – In this Feb. 11, 2018, file photo, Dallas Stars head coach Ken Hitchcock talks to the media prior to an NHL hockey game against the Vancouver Canucks, in Dallas. Stars coach Ken Hitchcock is retiring, ending a 22-year career as the third-winningest coach in NHL history. Hitchcock will become a consultant for the team he led to its only Stanley Cup championship in 1999. (AP Photo/Michael Ainsworth, File)(Photo: The Associated Press)

Ken Hitchcock wasn’t sure how long he would coach the Dallas Stars the second time around after 15 years away.

Turned out to be one season.

The coach who led Dallas to its only Stanley Cup championship retired Friday, ending a 22-year career as the third-winningest coach in NHL history. The 823 wins are behind only Scotty Bowman (1,244) and Joel Quenneville (884). He’s fourth in total games with 1,536.

The 66-year-old Hitchcock will become a consultant for the Stars.

“I have contemplated this since our last game and I came to the conclusion that now is the right time to step away and let the younger generation of coaches take over,” said Hitchcock, who last…