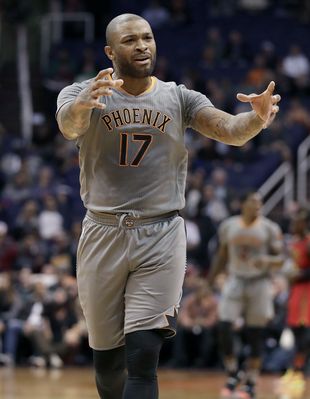 Phoenix Suns forward P.J. Tucker (17) reacts to a foul called against him during the first half of an NBA basketball game against the Atlanta Hawks, Wednesday, Nov. 30, 2016, in Phoenix. (AP Photo/Matt York)(Photo: The Associated Press)

PHOENIX (AP) — The Phoenix Suns’ veterans are sometimes forgotten on a team with several players in their teens and early 20s. It was experienced players who made the difference Wednesday night, though.

Brandon Knight scored 23 points off the bench and Phoenix reserves combined for 54 as the Suns held off the slumping Atlanta Hawks 109-107 thanks to a key fourth-quarter run.

Jared Dudley and P.J. Tucker added 17 points apiece for the Suns, who had lost four of five. Leandro Barbosa made three important baskets in the fourth.

“That’s what we need from them, is stability,” Phoenix coach Earl Watson said. “Our young guys are going to have ups and downs, trying to make it as consistent as possible.”

Eric Bledsoe’s bank shot with 28.4 seconds left gave the Suns a 104-99 lead and all but sealed Atlanta’s fourth consecutive defeat. Bledsoe, who shot 5 for 17 from the field, pounded the scorer’s table in…