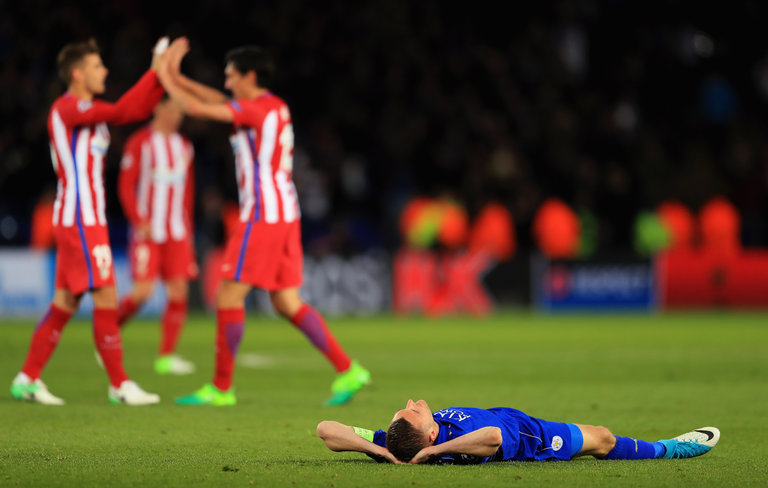 Leicester City’s Jamie Vardy, on the ground, had a different reaction than the Atletico players after their 1-1 draw.

LEICESTER, England — Leicester City’s fairytale Champions League journey came to an end at the King Power Stadium on Tuesday when they were held to a 1-1 draw by Atlético Madrid, which reached the semifinals for the third time in four seasons with a 2-1 aggregate win.

A first-half goal by Saul Niguez proved enough to ease the Spanish side through to the last four despite Leicester’s spirited revival in the second half when Jamie Vardy equalized on the night.

Diego Simeone’s side, who won the first leg in Madrid, 1-0, had the better of the opening exchanges, but Leicester finally found its feet, with Shinji Okazaki firing over the goal frame from close range.

It was the visitors who struck first, though. Saul extended Atlético’s overall lead in the 26th minute, heading it home powerfully off Filipe Luís’s superb cross.

Leicester City, the Premier League champions who were in their first Champions League…