You Are Here: Home → On Baseball: Bad Blood Between the Yankees and the Red Sox Is Good for Baseball On Baseball: Bad Blood Between the Yankees and the Red Sox Is Good for Baseball

In other words, the superstars have done superstar things. Yes, the games have been long; these teams know no other way. But the talent is undeniable. You won’t find zany clubhouse characters like Johnny Damon or Kevin Millar, but the play on the field is still sublime — and feisty.

The benches actually cleared twice on Wednesday, in the third and seventh innings. Austin slid into second base in the third and spiked shortstop Brock Holt’s lower calf. Holt just stood there, telling Austin what he thought about it. Austin got a little closer, and suddenly 50 players had swarmed the field. Nothing much happened, though.

“I thought it was over,” Holt said. “We’re not trying to fight those guys over there. They’re big. I wasn’t expecting anything to happen, something did happen, and it escalated quickly.”

Since we’re using “Anchorman” terms, after Kelly drilled Austin in the seventh, the teams were throwing down in fisticuffs — a Cliff Johnson here, a Troy O’Leary there (or something like that). Kelly, naturally, insisted the pitch got away from him. Give the guy credit, at least, for self-deprecating supporting evidence. 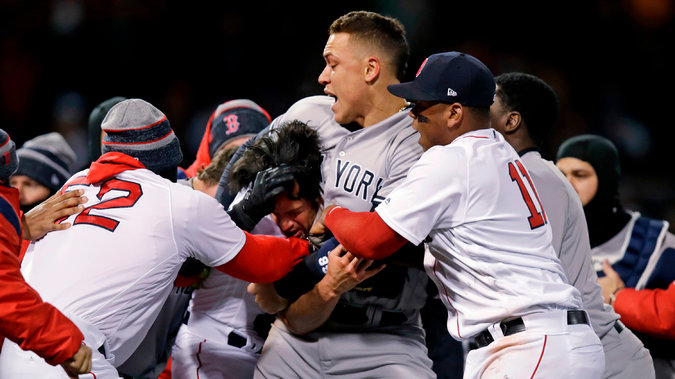