You Are Here: Home → Rask helps Hurricanes rally for 3-2 win over Canadiens 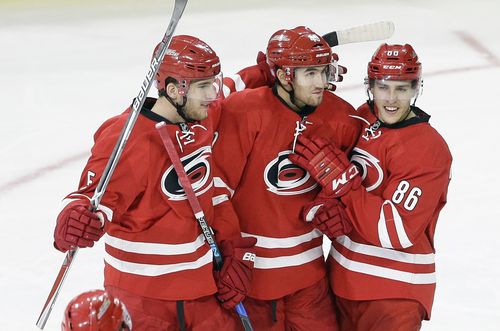 RALEIGH, N.C. (AP) — A big comeback win has the Carolina Hurricanes on a three-game winning streak and a point-a-game pace for the season.

Victor Rask had a goal and an assist in Carolina’s three-goal third period as the Hurricanes rallied for a 3-2 win over the Montreal Canadiens on Friday night.

Jeff Skinner and Teuvo Teravainen also scored for the Hurricanes (6-6-4) during their outburst over a 5-minute, 50-second span of third period. Ron Hainsey had two assists and Cam Ward stopped 31 shots.

“It’s a big lift,” Hainsey said of the comeback. “Obviously we were outplayed through two (periods). We just had a hard time keeping much in their zone. Being able to claw one out in the third period — maybe you don’t deserve it the way the bulk of the game went, but it’s certainly something we’ll…