You Are Here: Home → Sparks 75, Lynx 64: Sparks Are One Win Away From Their Second Straight W.N.B.A. Title

Sparks 75, Lynx 64: Sparks Are One Win Away From Their Second Straight W.N.B.A. Title 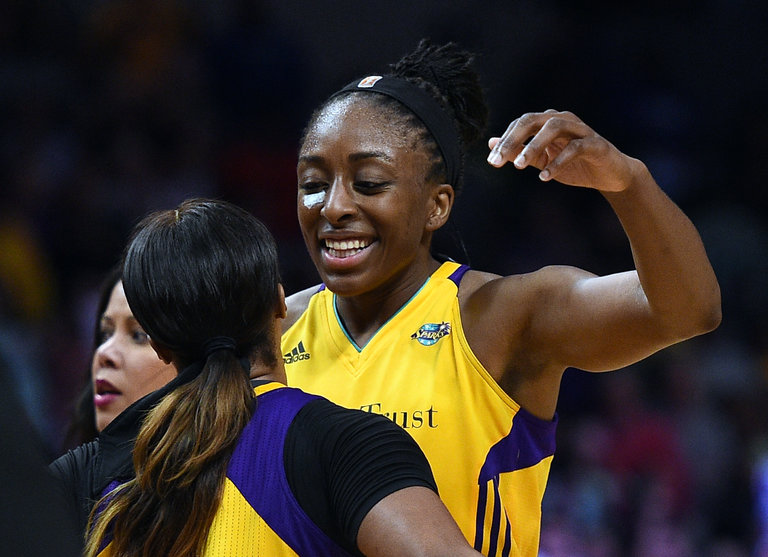 Nneka Ogwumike preparing to hug her Los Angeles Sparks teammate Odyssey Sims after their team won Game 3 of the W.N.B.A. finals on Friday.

LOS ANGELES — Nneka Ogwumike and Odyssey Sims each scored 16 points to help the Los Angeles Sparks beat the Minnesota Lynx 75-64 in Game 3 of the W.N.B.A. finals on Friday night.

The Sparks have taken a 2-1 lead in the best-of-five game series and with one more win can become the first team since 2002 to win the championship in back-to-back years. Los Angeles won back-to-back titles in 2001 and 2002.

For the Lynx, Maya Moore scored 16 points, all of which came in the second half. She picked up her third foul in the second quarter and fouled out with 37 seconds left.

The Sparks led by as many as 13 points in the third quarter but the Lynx pulled to within one in the fourth quarter. Los Angeles held on, outscoring Minnesota 17-7 after the Lynx got within 58-57.