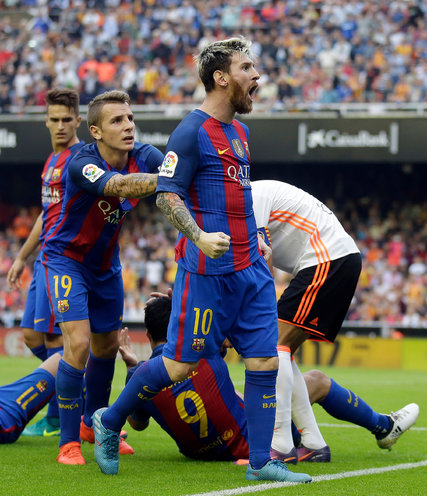 Barcelona’s Lionel Messi after converting a penalty in the 94th minute against Valencia. It was Messi’s sixth goal in three games since returning from injury.

Lionel Messi’s penalty kick in stoppage time of a pulsating 3-2 win at Valencia on Saturday moved Barcelona atop the Spanish league, but the victory came at a cost: Andrés Iniesta sustained ligament damage in his right knee that could keep him out for several months.

Messi also scored in the 22nd minute, a goal that was allowed to stand even though Luis Suárez had strayed offside. Valencia responded after halftime with goals by Munir El Haddadi and Rodrigo in a six-minute stretch.

Suárez tied the game in the 62nd minute, and deep in stoppage time, he was upended inside the penalty box by Aymen Abdennour. Valencia goalkeeper Diego Alves had already saved three penalty kicks this season, but Messi sent the ball into the bottom corner to secure a vital 3 points for Barcelona in the title race. It was his sixth goal in three games since he returned from a groin injury.