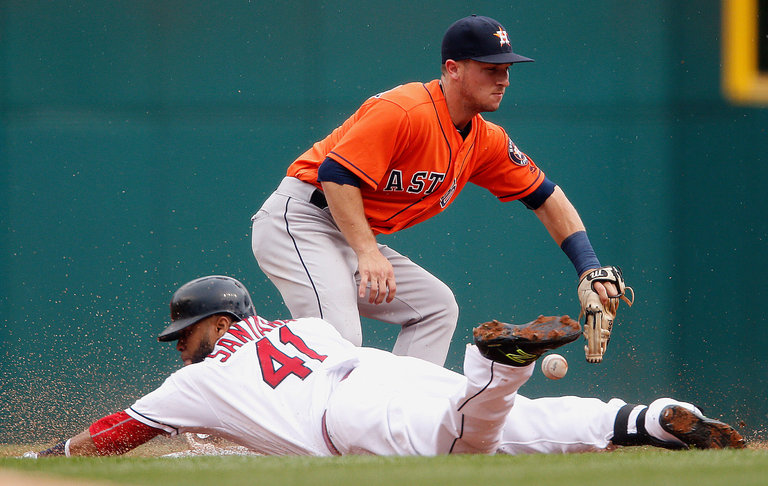 The Indians’ Carlos Santana sliding safely into second past the Astros’ Alex Bregman in the first inning. Cleveland won, 10-7.

The Indians scored two runs on a disputed bases-loaded wild pitch by Astros pitcher David Paulino in the third inning, and Cleveland went on to a 10-7 victory over visiting Houston on Thursday. The episode led to the ejection of Astros Manager A. J. Hinch.

Cleveland was leading by 2-1 when Lonnie Chisenhall attempted to check his swing on a pitch in the dirt. The ball bounced away from catcher Jason Castro and rolled toward the on-deck circle near the Indians’ dugout.

Play continued, although replays showed that Chisenhall had fouled off the pitch. All three runners — Francisco Lindor, Mike Napoli and Jose Ramirez — crossed the plate. Hinch protested the ruling and was ejected by the plate umpire Jim Joyce. After a video review, Lindor and Napoli were allowed to score for a 4-1 lead, and Ramirez was placed at second.