You Are Here: Home → Tiger to skip next tournament; when will he play next? 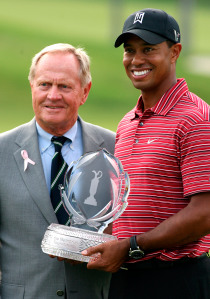 Tiger to skip next tournament; when will he play next?

Another week, another field without Tiger Woods.

Friday’s 5 p.m. ET deadline to officially commit to next week’s Rocket Mortgage Classic in Detroit has come and gone without Woods entering his name into the field.

The reigning Masters champion and 15-time major winner hasn’t played an official PGA Tour event since February’s Genesis Invitational at Riviera, when he shot a final-round 77 to finish in last place.

In his only other Tour start this year, he tied for ninth in the Farmers Insurance Open at Torrey Pines in San Diego.

Woods skipped both the Arnold Palmer Invitational and the Players while nursing a back injury before the coronavirus pandemic suspended the Tour season. He looked fit as a fiddle playing in The Match: Champions for Charity on May 24, where he and Peyton Manning defeated Phil Mickelson and Tom Brady at Woods’ home club, Medalist Golf Club.

Woods did not play in the inaugural Rocket Mortgage Classic last season.

Tiger Woods holds the trophy next to Jack Nicklaus after winning the 2009 Memorial in Dublin, Ohio. Photo by Mike Munden/Associated Press

The next tournament Woods potentially could play would be the Workday Charity Open, a replacement…