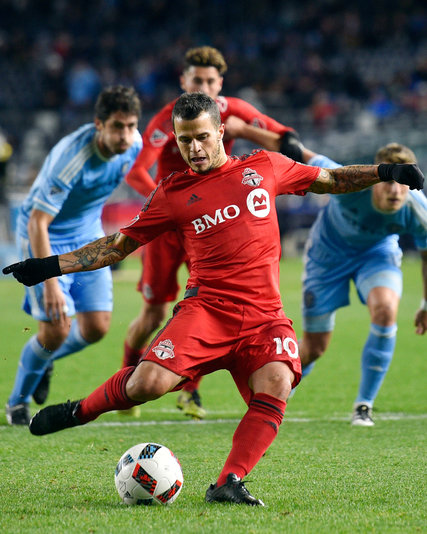 When Major League Soccer announced the three finalists for most valuable player last week, Sebastian Giovinco, who won the award last year, was absent despite his 17 goals and 15 assists — the league’s highest combined total.

Giovinco, the 5-foot-4 dynamo for Toronto F.C., provided a fresh reminder of how many ways he can influence a game on Sunday night, scoring early and often as his hat trick thrust Toronto F.C. into the Eastern Conference finals with a 5-0 pasting of New York City F.C. at Yankee Stadium.

Toronto earned a 7-0 win on aggregate in the home-and-home series and will face Montreal for a spot in the M.L.S. Cup final.

As for the M.V.P. finalists — who were selected by players, team staff members and news media members — N.Y.C.F.C. forward David Villa and Red Bulls midfielder Sacha Klejstan and forward Bradley Wright-Phillips had their teams eliminated from the playoffs on Sunday.

While Giovinco had shrugged off the…