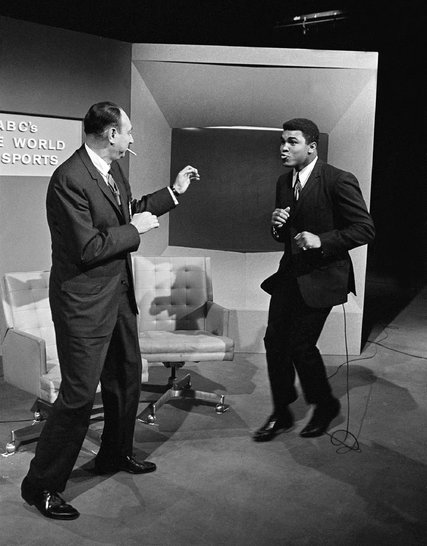 In 1966, Muhammad Ali demonstrated to Howard Cosell how he had used the Ali Shuffle in his fight against Cleveland Williams.

They were a 1960s power couple, two hypertalkative showmen: Muhammad Ali, the African-American boxer born with a slave name, and Howard Cosell, the Jewish Brooklyn lawyer who found his calling in sportscasting.

Ali, who died Friday at 74, recited doggerel, danced in the ring, taunted his opponents and converted to Islam. And, as he told us, he was pretty.

Cosell was homely, with an adenoidal voice and a collection of toupees. But at his best, he could call a boxing match with dramatic brio, articulate complex issues, narrate football highlights with astonishing skill and little preparation, and, as he often said, “tell it like it is.”

ABC Sports, Cosell’s employer, carried a lot of Ali’s fights, so Cosell was at ringside, inside the ring interviewing Ali and his opponents after fights, or in the network’s studio interviewing Ali. Their camaraderie produced an entertaining union of spirited…