For a country that continues to receive international condemnation for the doping conspiracy, Russia isn’t intent on keeping a low profile.

“Russia is a full participant in the Olympic Games, and Russia can show its sporting power,” the country’s ambassador to South Korea, Alexander Timonin, said when opening the celebration venue Friday. “We believe in our athletes, we are proud of them, and we hope that they can achieve their very best sporting results and bring glory to our great motherland.”

The nationalist fervor is at odds with the demands issued by the International Olympic Committee, which barred the country’s Olympic officials from attending, prohibited the official display of the country’s flag and uniforms and refused the playing of its national anthem as punishment for a yearslong doping program that had corrupted several Winter and Summer Games.

A total of 47 athletes the I.O.C. deemed tainted by the doping scheme were denied entry to the games as well. 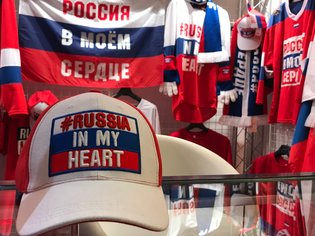 Hats, scarves and shirts were for sale at Sports House, where the feeling of Russian pride is unmistakable, despite restrictions imposed by the I.O.C. for a…